Spanisch
Welcome back!
You do not have any products in your shopping cart yet.
Show shopping cart
Main pageLEGO® Star Wars™ 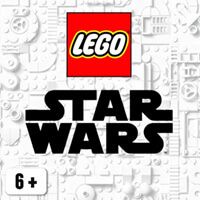 One of the most popular franchises in the world, Star Wars™, has been one with the Force since 1977 – and our LEGO® Star Wars™ sets bring the "galaxy far, far away" much closer. With your favourite LEGO® Star Wars™ sets, you can join the Jedi or the Sith and battle between the light and dark side of The Force whilst recreating scenes from the films with all of your favourite characters such as Luke Skywalker, Yoda, Grogu, Darth Vader, Emperor Palpatine, Princess Leia, Han Solo, Chewbacca, R2-D2, C-3PO and more. Or, for more skilled builders, you can create your own Star Wars™ helmet, Millennium Falcon™, Imperial Star Destroyer™ or AT-AT™. With Star Wars™ buildable construction toys and LEGO Star Wars™ minifigures based on classic comic books and action-packed films such as the Skywalker saga films and TV programmes such as The Mandalorian, Droids, Star Wars: The Clone Wars and The Book of Boba Fett, our exciting collection contains the best gifts for kids aged 6+ and adult collectors who love all things Star Wars™. Looking for the perfect gift? Here are the top LEGO® Star Wars™ gifts for adults and the best LEGO® Star Wars™ gifts for kids.

© 2022 www.brickswelt.eu • Alle Rechte vorbehalten
modified eCommerce Shopsoftware © 2009-2022 • Design & Umsetzung: Rehm Webdesign
LEGO, the LEGO logo, the Minifigure, DUPLO, LEGENDS OF CHIMA, NINJAGO, BIONICLE, MINDSTORMS and MIXELS are trademarks and copyrights of the LEGO Group. ©2020 The LEGO Group. All rights reserved. Use of this site signifies your agreement to the Terms of Use.
Categories
modified eCommerce Shopsoftware © 2009-2022